The Fountain of Youth Is On Your Plate!!

Have Hollywood stars discovered the fountain of youth?

Marion Ross was 47 when she began playing Mrs. Cunningham on Happy Days. Jean Stapleton was also 47 when she started her role as Edith Bunker in All in The Family. Rue McClanahan was 51 when The Golden Girls premiered.

Compare this to some of today’s stars: Jennifer Lopez is 46, Halle Berry is 49, and Diane Lane is 51. All of them look younger than their counterparts from several decades ago. Why does it seem that Hollywood stars are aging more slowly than ever before? Is it due to plastic surgery?

Today’s actors and actresses in their 40’s and early 50’s were the first ones to focus on sunscreen and preventative treatments, which they typically began in their 20’s and 30’s. They’re also the first generation of stars who’ve been able to benefit from medically-active products that can actually reduce and reverse aging. Products like retinol, growth factors, and antioxidants.

Men are also getting into the act. Male celebrities like Brad Pitt (52) and Matthew McConaughey (46) have admitted to using topical products to slow down the aging process. Rob Lowe (51) even has his own skin care line, complete with anti-aging creams.

But possibly even more important than the creams these celebs apply to their skin is the food they put in their mouths. More and more studies are proving that what we eat can have a dramatic impact on how old we look and how quickly we age. The fountain of youth is actually on your plate.

Three main groups of foods can cause our skin to age prematurely. These groups of age-wreckers are sugar, saturated fats, and processed foods.

Foods rich in sugar, such as sweets but even refined carbohydrates like white bread and white rice, can accelerate aging by forming advanced glycation end products (AGE’s). AGE’s are the result of sugar molecules attaching to collagen and elastin, the building blocks of our skin. These hybrids can deform the internal structure of our skin and cause it to age more quickly. Fructose, especially high-fructose corn syrup, is one of the worst foods in regards to creating AGE’s. Studies have supported the belief that eating large amounts of sugar can cause the skin, and our entire body, to age more quickly.

Saturated fats, especially high-fat meats, also contain AGE’s and tend to be inflammatory, which can also affect our skin’s internal structure. A study in the Journal of the American College of Nutrition found that people who ate a lot of saturated fats had more wrinkling than those who ate less.

Processed foods also cause our skin to age more quickly. These types of foods, especially fried foods and foods rich in preservatives, can produce skin-damaging free radicals. Free radicals are created by the normal processes of our bodies, but can also be obtained by external sources, such as UV radiation, pollution, and even chemicals in our food. When our body is flooded with free radicals, they can cause irreversible damage to the collagen of our skin.

So does eating a healthier diet cause us to age more slowly? Yes!

Decreasing our sugar intake is the first key to slowing down the aging process. Eating less sugar, by avoiding sweets and substituting whole grains for refined grains, can lessen the creation of AGE’s and slow down the aging of our skin. Adding fiber, protein, or fat to any sugar we do consume (such as putting almond butter on our bagels and adding peanuts to the candy we grab from the office candy jar) can be another effective way to slow down the release of sugar in our bloodstream and lessen its negative effects on aging.

The trend towards eating healthier fats is also helping us to look and be younger. Studies have shown that a diet rich in monounsaturated fatty acids (such as those found in avocados, olive oil, and nuts) and polyunsaturated fatty acids (found most often in cold water fish like salmon and tuna) can decrease the redness and damage associated with UV exposure, calm inflamed and broken-out skin, and even improve the skin’s elasticity, thereby improving wrinkles.

The recent trend towards eating real food can also cause our bodies to age more slowly. This includes fresh fruits and vegetables, which are rich in free radical-fighting antioxidants. Vitamin C, one of the most potent of the free radical-fighting antioxidants, has been proven to reduce wrinkles and dry skin, but must be consumed each day. Vitamin C degrades quickly after harvest and with cooking, so it’s most potent when those fruits and vegetables containing it are eaten extremely fresh, and not canned or preserved.

I have seen this dietary age-reversing phenomenon first hand in my patients. Eating a healthier diet, with less sugar, more healthy fats, and more antioxidant-rich foods, can result in a significant improvement in their appearances. Even after just a few weeks.

So why does it seem that actors and actresses in Hollywood are defying their ages and looking younger and younger?

It’s not necessarily plastic surgery. Far from it. In fact, it’s the opposite of surgery. They’re eating better and taking better care of their skin. And this is something everyone can do.

Comments Off on The Fountain of Youth Is On Your Plate!!

It has been nearly five months since Martie Martin of Reeves was in a terrible car accident.

“Coming home and I went around a curve,” he said.  “Something popped in my truck and next thing I know, it’s in a ditch.”

From the ditch, Martin’s truck then slammed into a tree.

“I remember the impact of hitting a tree and that’s about it,” said Martin.

Memorial Medical Group facial plastic surgeon and otolaryngologist, Dr. Hope Bueller, was called in to the operating room that morning to reconstruct Martin’s face, while another surgeon removed part of his lower intestines.

“His face was pretty torn up,” said Dr. Bueller, “he had a split of the upper lip through and through and he had some of his nasal cartilage, which had been torn and detached from where they belonged, so those all had to be reattached and repaired and his upper lip required repair, too.”

Dr. Bueller says surgery needed to be done immediately to restore function to Martin’s nose and mouth, in order to breathe, speak, and swallow.

“Initially it was just a matter of figuring out which pieces of tissue went where,” said Dr. Bueller.  “They were very displaced, so we had to clean the wound and then just start putting the pieces back together, doing a lot of meticulous fine suturing.”

Eleven facial procedures were performed on the operating table that day and Martin was given strict instructions to ensure the best healing.

“Keep it clean and keep it moist,” he said.  “Try not to squint or move too much, try to do too many facial expressions.”

“Within about a week he was starting to feel better and able to resume some of his activities, but really it takes at least a month or six weeks to have everything completely healed,” said Dr. Bueller.

In the days following the procedures, Martin admits he had doubts about if he would ever look like he did before the accident.

“I didn’t think it was ever going to heal up the way it has,” said Martin.

But today, Martin says he is back to feeling like himself and looking like himself, with just a couple of small scars that tell the story of his survival.

You can learn more about non-surgical facial procedures at an open house with Dr. Bueller on Thursday, February 18. It is at Lake Charles Memorial for Women’s physicians offices on Gauthier Rd. from 5:30-7:00 P.M. There will be giveaways, refreshments, and discounts offered for those signing up for services.

Comments Off on Plastic surgery rebuilds face of trauma patient 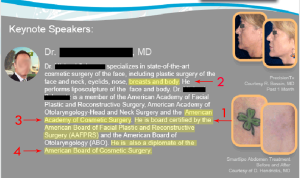 There are 4 things wrong with this advertisement:

1) This doctor is Board Certified in Otolaryngology. Which means his scope of practice is the head and neck.

2) Why is he doing Breast augmentation and liposuction?

3) To be in The American Academy of Cosmetic Surgeons you have to be board certified in any “surgical specialty” by a member board of the American Board of Medical Specialties. Not “Plastic Surgery”

Comments Off on Keynote Speaker 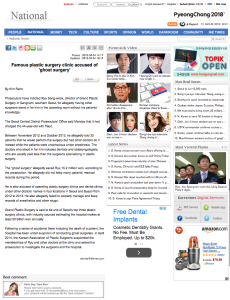 Comments Off on Board Certified Cosmetic Surgeon 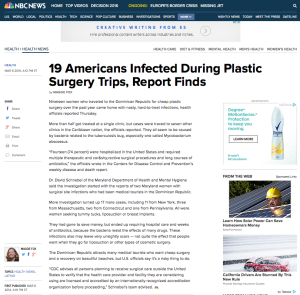 The Dominican Republic attracts many medical tourists who want cheap surgery and a recovery on beautiful beaches, but U.S. officials say it’s a risky thing to do. 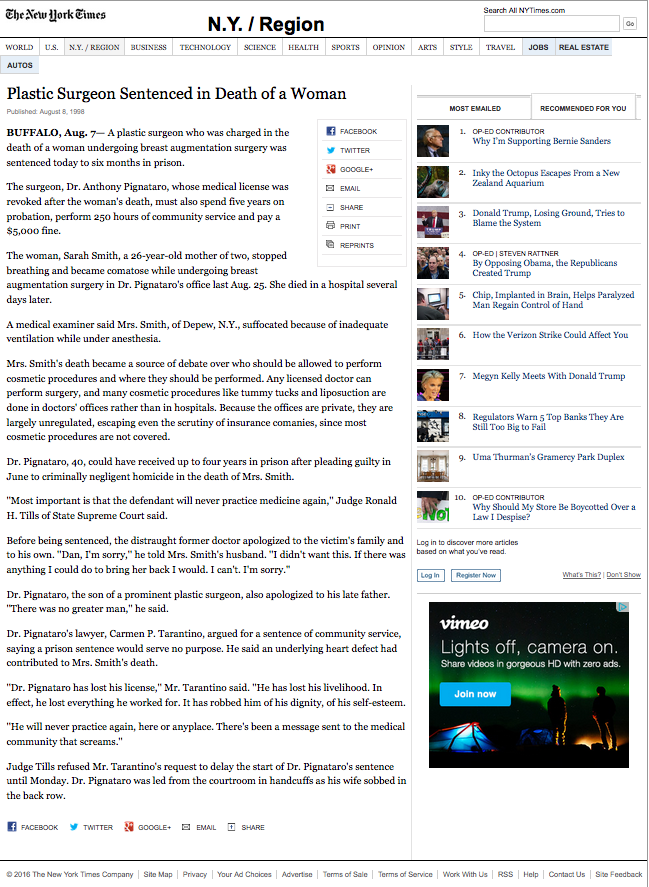 The Headline says Plastic Surgeon, But he is actually a dentist!

Comments Off on Always Read the fine print!!!