Jox Rox Chicago and Par for the Cause came together in the name of THE HEALING CURVE for a summer charity event of wondrous proportions. The event took place at CD&ME in Frankfort, IL. It was an ideal setting to raise money for board certified plastic surgeon Dr. Gary Motykie’s Foundation THE HEALING CURVE- which provides reconstructive surgery for cancer and trauma survivors. A beautiful outdoor stage was surrounded by acres of rolling fields, gardens, an incredible waterfall and a giant fire pit. Starting at 1 pm, the event was an amazing day filled with sweet melodious tunes from several amazing bands, spectacular food from Chicago, wonderful drinks from several local bars and an auction full of high demand Chicago sports teams memorabilia. The Chicago Six, a band featuring Dan Hampton, Steve “Mongo” McMichael, Otis Wilson of the Super Bowl Champion ’85 Bears, along with Jim Peterik of SURVIVOR headlined the day late into the evening.  Numerous people attended the event from all over the states to drink, eat, listen to music and support THE HEALING CURVE.

Thank you to everyone who took part in this amazing event. To those who took the months to put this together, the sponsors, all the bands, food trucks, volunteers, CD&ME, and most importantly all who came and gave their support to this incredible charity- THANK YOU- it is all of you who make THE HEALING CURVE possible!

Comments Off on The Healing Curve Summer Charity Event Recap 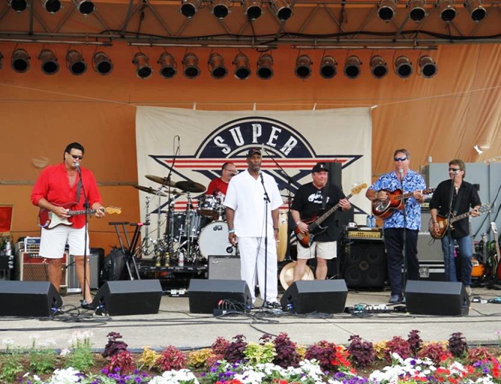